Why Path of Exile is the Best ARPG

Path of Exile is the spiritual successor to Diablo 2.

The team who makes Path of Exile, Grinding Gear Games (GGG), are dedicated to just this franchise and this game. They continuously update and improve the game since its launch. GGG’s commitment to their frequent and quality updates always pulls me back. Game is 100% free to play and the only things they offer players to buy are skins/costumes and stash tabs (bank/chest storage).

Every 13 weeks, there’s a new season. This offers players an opportunity to return to the game and try new mechanics, game-play modes, skills, and more. The video below shows how the game starts out; pretty slow paced as in most ARPG’s, learning to get a feel for the mechanics, loot, play feel, etc.

Below you can see the very beginning of a new character in a new league and how it grows in the first few hours:

Path of Exile is quite complex and can be daunting to learn for newer players, but there are so many fan-made tools and sites out there that help with the game. With time and actually playing, you get used to everything.

The community is really awesome in this game. The streamers are super helpful for new players and offer detailed build guides, news updates, ideas, etc. Toolwise, there’s lots of devs and people contributing some cool tools to help improve the game. Some of the awesome community-made tools available for Path of Exile:

These are just the streamers I’ve subscribed to and watch from time to time. Everyone on this list are much more knowledgeable and skilled at the game and are great resources to learn from.

There’s technically seven top level classes in the game. You can view them in detail here. Each class has three ‘sub’ classes available with the exception of Scion. These are called Ascendancies. Classes are largely based on the three standard main attributes: strength, dexterity, and intelligence. The best part of classes in this game as they’re only a suggestion really. You could chose any class technically and build it anyway, it may not be optimized, but this flexibility allows for truly unique playability and builds.

Skills are pretty unique in this game. Skill gems, items that are socketed into gear, allow you to combine, mix, and match abilities to create new, stronger combos. How you combine these skill gems will dictate how you play your class. There’s passive and active skills as well as minion, totem, trap, curses, and aura based skills on top of your standard active (you press a button to cast an ability) gems. Then there’s some unique ones like Cast of Crit or Cast when Damage Taken gems, which will trigger abilities when their requirements have been met allowing for even more unique game-play. 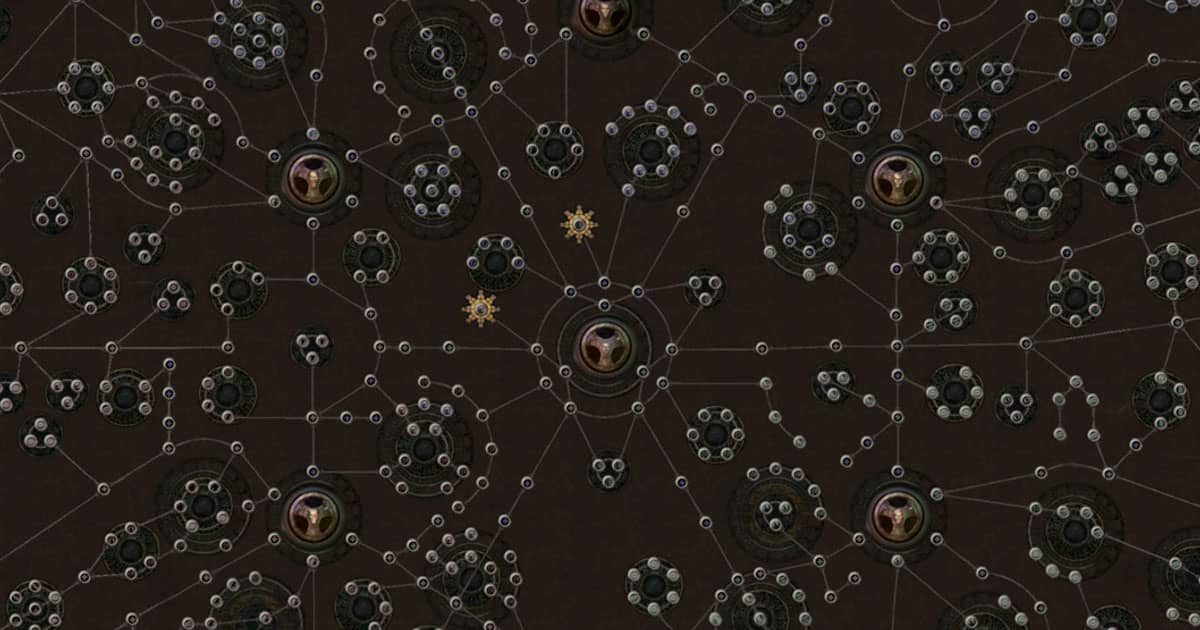 The skill tree, seen above, is quite expansive in this game. You can go in any direction from your class’ starting point. Every level and on some quests, you’ll get passive skill points. Put them in the tree to make your character more fleshed out and stronger. You can experiment greatly here and the passives aren’t permanent and can be redone if desired.

The game is known for its depth and complexity. Crafting, in particular, is one of the truly unique features of this game.

There is no gold in this game. Currency are items that allow you to modify other items/gear. All currency is a form of craft-able currency. Each ‘currency’ has a purpose in modifying all your items. Here’s a list of all available currencies in the game on PoE GamePedia. Above you can see how I utilize some currencies to craft an endgame weapon for my character.

The bosses are fairly unique mechanic wise in this game. As long as you’re resistant capped and have some decent defenses and decent DPS, you can take on most any bosses. Below you can see some bosses I did last league. Around 38 minutes you can see the final boss in the game, Sirus:

What makes PoE really stick out is the attention to detail in the endgame. There’s several different options of what you can do in the endgame content. There’s lots of content available for pushing your build and character to its limits. There’s Delve, a pretty much endless dive into tight underground dungeons, getting harder as you get deeper. There’s the meta, Maps (the Atlas), this is where we will likely spend a majority of the endgame. Maps you can modify with craft-able items to make the level as hard and challenging as you’d like it to be. Typically greater difficulty comes with greater rewards. There’s other ‘League mechanics’ available for endgame. This is just previous seasonal exclusive content ‘made core’. This just means certain mechanics such as Metamorph, Blight, Synthesis, Legion, Incursion, Breach, Harbinger, Bestiary, Abyss, Betrayal, Delirium, and so on.

Below you can see examples of Legion, Delve, then just Atlas (Maps).

Compared to other ARPGs, and just other games in general, GGG puts out new content quite consistently. Roughly four leagues a year, each one offers a fresh new take on the game introducing new items, skills, bosses, endgame league mechanics, skins, and more. I continually find myself returning for a month or two every time they release a new league.

If you’re into action RPGs and like a real challenge, especially Hardcore, single life challenges: Path of Exile is the game for you.